Home Biodiversity Crocodile Safari Hunting in the Northern Territory: is it Moral?

Crocodile Safari Hunting in the Northern Territory: is it Moral?

This week Nigel Scullion, Senator for NT and the Federal Minister for Indigenous Affairs re-opened the controversy over safari hunting when he opined that safari hunting of crocodiles in the Northern Territory could be taking place within a year.

As fast bowler Glen McGrath found out to his detriment when photos emerged of him posing beside a dead elephant earlier this year, safari hunting of any type has many vocal opponents within the community.

Tourism is the second largest industry in the Northern and depends heavily on the wild landscape experience to attract tourists. Crocodiles and the NT are almost synonymous (think crocodile Dundee)  and seeing a crocodile in the wild is on just about every tourist’s to do list. This means that crocodiles are big business.

How many crocodiles are there and how many would be hunted?

There are an estimated 100,000 crocodiles in the NT, which is close to the number likely to have been present prior to European settlement. They are not listed as a Threatened Species (which includes the categories of Vulnerable, Endangered and Critically Endangered) but they are afforded special protection by virtue of being on the List of Protected Species under the Commonwealth Environment Protection and Biodiversity Conservation Act and the NT Parks and Wildlife Conservation Act.

Safari hunting, is the hunting and killing of a wild animal by a paying customer. Parts of the animal may be kept as a trophy (which is why it is sometimes called trophy hunting) and the carcass may be used for meat or other purposes.  It should not to be confused with culling which has as a goal the removal of significant portion of the population, or risk management, which is the removal of specific animals deemed to be a risk or in the ‘wrong’ place. 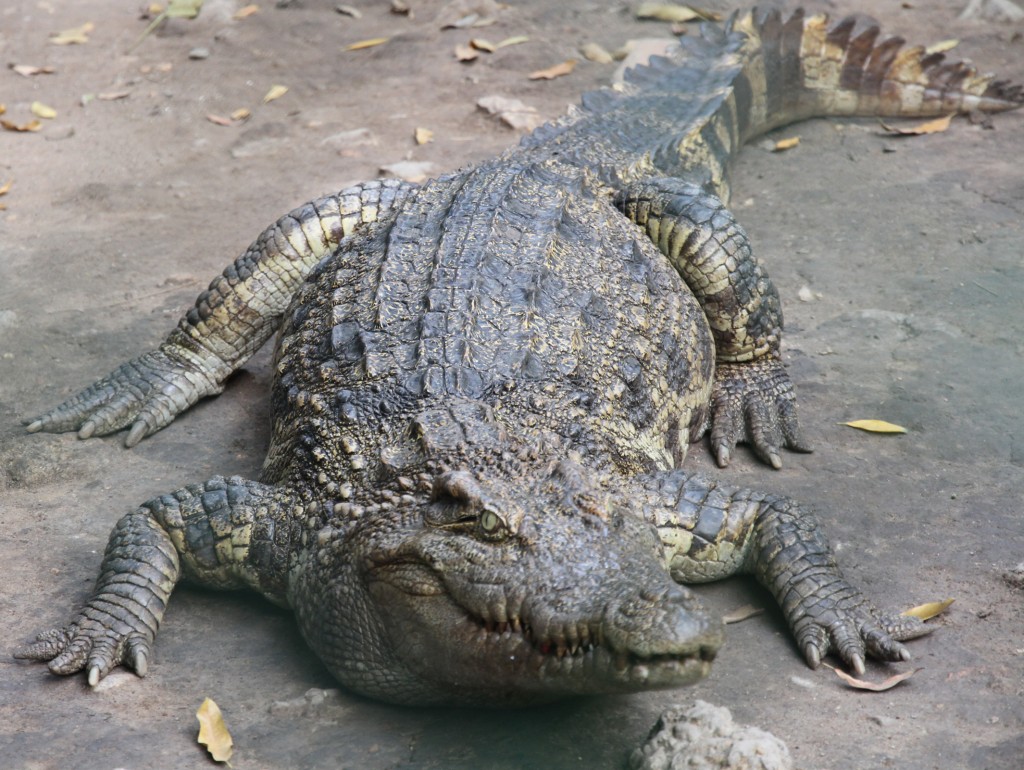 Crocodile of size that may be hunted as soon as next year (photo credit: http://www.freephotos.biz/)

Safari hunting of up to 50 crocodiles of 3.5m in length or larger was included in the NT Crocodile Management Plan 2012 – 2014. The Plan also included (at Appendix 5) a detailed Guideline for the operation of safaris that addressed the implementation of safeguards for public safety and the prevention of undue suffering in the killing of the crocodiles. However the plan was only accepted by the Federal Environment Minister on the condition that highlighted sections pertaining to safari hunting be removed, in effect the Federal Minister prevented safari hunting of crocodiles. The existing management plan, the NT Crocodile Management Plan  2014- 2015, which makes no mention of safari hunting, is due to expire at the end of this year thereby opening the way for safari hunting as early as 2016.

The NT already has safari hunting of banteng, buffalo and pigs that attracts local, interstate and international hunters who pay not only trophy fees but also for accommodation and other expenses. Safari hunting operations currently provide trophy fees of up to $1,500 per buffalo and $2,900 per banteng to Aboriginal landholders.

The arguments made against safari hunting (for example by the RSPCA) are primarily based on mainly moral concerns; the first being the pain and loss of life inflicted on the animal, and secondly the questionable attitude of looking at animals as lesser beings and deriving enjoyment from killing them.

A secondary argument is that safari hunting is antagonistic to ecotourism, which provides a greater number of jobs and lengthens the time wildlife exists as an economic resource. However an equal number of studies have shown that safari hunting is actually complimentary and the International Union for Conservation of Nature recognizes that trophy hunting, when well-managed, can be sustainable and generate significant economic incentives for the conservation of species and their habitats.

Is crocodile safari hunting moral? Well, like most questions, the answer to this one is “it depends”. In this case it depends on what moral principles you are applying. I have looked at this from the two different moral perspectives that seem to characterise the debate, utilitarianism and biocentrism, to answer the question of whether or not crocodile safari hunting is moral

Utilitarianism is an ethical stance holding that the best moral action is the one that leads to the greatest good for the greatest number of entities – usually taken to be people but can be biological communities. From a utilitarian point of view we can reach a conclusion that safari hunting is acceptable, and a more moral outcome than not hunting. This is because of the enjoyment derived, the financial benefits to landowners (and associated service providers), and that crocodile populations are not adversely affected by the loss of a small number of adults.

Biocentrism is an ethical stance which asserts the value of non-human life in nature, positing that humans are part of the environment, just one species among many, not the owners of the environment. From a biocentric viewpoint any utilitarian calculation (such as described above) must provide equal weight to maximising benefits for all species, which would inevitably lead to the conclusion that safari hunting is immoral because any benefits that may be derived from the killing of the crocodiles would be swamped by the pain and deaths of the crocodiles.

So which way is it? I have to confess to leaning towards the utilitarian perspective that safari hunting is acceptable but with the caveat that it must be undertaken in controlled manner that minimises pain and suffering to the crocodiles.