Of the 4 billion or so species that have evolved over the last 3.5 billion years some 99% have gone extinct! Luckily over time the rate of extinction has normally been balanced by the evolution of new species. But there have been 5 exceptions to this pattern, periods of mass extinction when the rate of species loss was so great that the biodiversity of the earth was substantially reduced.

The number of species on earth at this point in time is estimated to be 8.7 million, with perhaps another million or so still to be identified. But there is cruel twist to knowing how many species there are on the planet; and that is knowing how fast they are going extinct.

A recent study by Caballos et al published in Science Advances 2015  builds on, an re-enforces,  earlier work by Barnosky et al (Nature 2011) has  unequivocally shown that here has been an exceptionally rapid rate of species loss over the last few centuries when compared to “normal” background rate of species extinctions.

Coballos used the highest rate of background extinction (mammals) calculated by Barnosky and conservatively rounded it up to 2.0 e/msy. They then compared this to rate of species extinctions over the last 114 years. They found that species are going extinct at a rate of up to 100 times the background rate, or to put it bluntly; extinction rates have reached levels unparalleled since the dinosaurs died out 66 million years ago. Rather than the 9 extinctions among vertebrates that would be expected to have occurred in normal geological circumstances since 1900, their conservative estimate adds in another 368 extinctions, spread among mammals, birds, reptiles, amphibians and fish. 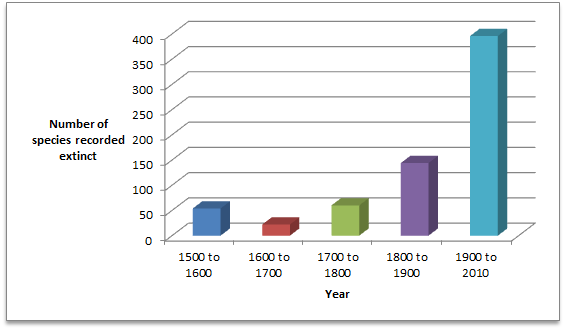 There is no longer any doubt: we have entered the sixth mass extinction in earth’s history.The last of mass extinction event occurred 65 million years ago and it took hundreds of thousands of years for species biodiversity to recover.

A key difference between this extinction event and previous events is that all of the past mass extinctions have been caused by sudden cataclysmic events such as a series of massive volcanic outbursts;  major asteroid impact; and dramatic sea level change, but none of these has caused the current event. Instead, the mass extinctions are being driven by the effects of just one single species; us.

(By the way, another great read on this topic is “The Sixth Extinction: An Unnatural History” a 2014 nonfiction book written by Elizabeth Kolbert.)