Indigenous Harvest of Protected Species: An absolute right or a wrong idea?

Last week footage was shown on a current affairs programme of dugong and turtles being hunted and killed by aboriginal people in northern Australia. The graphic scenes prompted some to question the cruelty of the fishing methods used, but the biggest response surrounded the apparent contradiction between allowing the taking of protected species by aboriginals and the conservation of endangered species.

Advocates for indigenous harvest of protected species argue that such use of natural resources is not in conflict with the goals of conservation and sustainable use. The arguments advanced in support of this position have two main themes; firstly the scale of taking for subsistence purposes, when using traditional methods, is small and within the assimilative capacity of the ecosystem. Secondly the taking of flora and fauna has historically provided the prime source of foods and materials for subsistence and is protected by Native Title rights. My opinion is that both of these arguments are flawed in support of this opinion I address each of the arguements below. 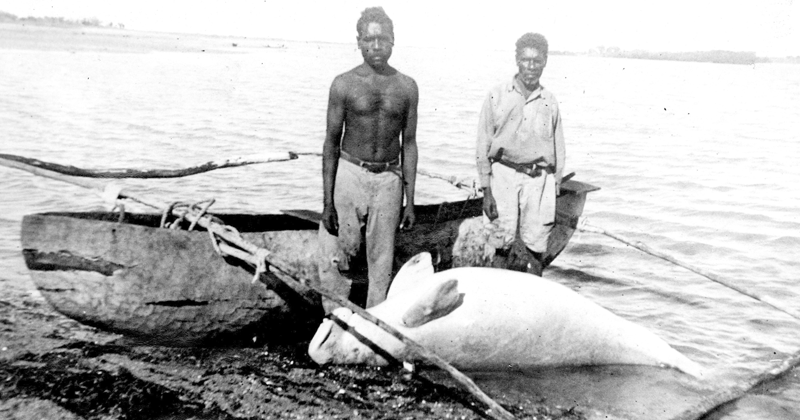 Concerns about indigenous harvest of protected species is not new; more than a decade ago a comprehensive study was undertaken to quantify the number of animals being taken. This study found that the existing levels of turtle and dugong harvest were unsustainably high. On 4th August 2003 the Minister for Fisheries gave an interview to ABC radio reproduced in part below.

MARK COLVIN: Because of their long history of fishing and hunting in the sea, Aboriginal and Torres Strait Island people are subject to different rules when it comes to the protection of marine species. But today that’s under question, after the Federal Government released a study showing that indigenous fishing is killing large numbers of protected species, including dugong and turtles.

ANNIE GUEST: The Minister for Fisheries, Ian McDonald, says the 12-month National Recreational and Indigenous Fishing Survey monitored residents in 44 communities from Broome to Cairns, except the Torres Strait.

IAN MCDONALD: One of the things that came out of the survey that particularly concerned the Government was the take of dugong and turtle in the indigenous areas.

ANNIE GUEST: The report found about 1,500 dugong, 25,000 turtles and 42,000 turtle eggs were killed. Senator McDonald says that’s too high and is depleting some populations.

IAN MCDONALD: We’ll be working at some strategies on how to better address that. Now, whether that includes total banning or a much more managed take of the species is something that the indigenous people working with the Government will work out.

The fear is that the strategies spoken about a decade ago by the then Minister for Fisheries have either not been effective or in some cases are still not developed. There appears to be a general reluctance on the part of government to address the issue of indigenous harvest of protected species and a conflated willingness to turn a blind eye to the seriousness of the threat to protected species. To illustrate my point this is what the Department of Sustainability, Environment, Water, Populations and Community (the Department) has to say about the threat of dugong harvest on their website .

In Australia, the Dugong has a significant cultural and dietary role for many Indigenous Australian peoples (PWS 2003), and Dugongs are hunted for meat, jewellery and tusks (Marsh et al 2002). In the Northern Territory, the level of Indigenous use and hunting is not adequately known, however, in the Borroloola region, Bradley (1997) (cited in PWS 2003) and Coates (2002) have reported annual harvest levels of 40 to 50 animals. This is less than 20% of the projected sustainable harvest for the region, which is currently at 400 animals, based on an estimated population size of 8000 (Saalfeld 2000, cited in PWS 2003). In the Torres Strait, estimates of harvest levels correlated against population size suggest that the level of Dugong harvesting may not be sustainable (Marsh et al 2002).  A study by Marsh and colleagues (2007) indicated that the northern Great Barrier Reef/Torres Strait population was substantial and genetically healthy. However, the study cautions that the ability to detect declines in marine mammal stocks is weak and, thus, lack of detection of decline in abundance does not prove that the present levels of harvest are sustainable.

For the Northern Territory the Department has chosen to ignore the 2003 report and instead cite an unseen 1997 report that casts the level of indigenous harvest of dugong at a sustainable 40 to 50 animals per year instead of the 296 animals recorded by the much more rigorous 2000/2001 survey. For the Torres Strait and Great Barrier Reef areas the Department has apparently taken a ‘reverse precautionary approach’ where the absence of absolute proof provides the justification for avoiding action.

It is not disputed that in some areas ‘bush tucker’ still comprises a significant portion of the food supply but to assert that harvest of turtles and dugongs is necessary for subsistence food supply is plainly ridiculous. However the concept of “subsistence” has been expanded by case law from mere ‘food subsistence” to include “cultural subsistence”. This is concept was sanctioned by Gummow J in the High Court case of Yanner v Eaton who commented that “The conduct of the appellant is inadequately identified in terms of the statutory definition of “take” and its components such as “hunt”. What was involved was the manifestation by the appellant of the beliefs, customs and laws of his community.”

Clearly the harvesting of turtles and dugongs is a valid native title right. But it does not follow that that regulating or prohibiting the hunting of turtles and dugong would amount to an extinguishment of a native title right as implied on the Department’s web site. The case of Regina v Sparrow in the Supreme Court of Canada considered Aboriginal fishing and hunting rights and concluded that regulation of native title fishing rights was a distinct concept from extinguishment of those rights. This was reaffirmed by Kirby P who said in his decision on Mason v Tritton , which involved an Aboriginal man charged with taking shellfish in contravention of the Fisheries and Oyster Farms Act 1935 (NSW), “that the right is controlled in great detail does not mean that the right is thereby extinguished” That regulation can occur without extinguishment was summarized by Gleeson CJ, Gaudron, Kirby, and Hayne JJ in Yanner v Eaton as follows: “… saying to a group of Aboriginal peoples, “you may not hunt or fish without a permit” does not sever their connection with the land and does not deny the continued exercise of the rights and interests that Aboriginal law and custom recognizes them as possessing.”

In conclusion I believe that the Department urgently needs to recognise that indigenous harvest of protected species is a real threat to the existence of those species. They then need to recognise that regulation and (where necessary for protection of those species) prohibition of indigenous harvest does not infringe on Native Title rights. Finally they need to shed their timidity and actually do something to protect these species.

What is your view?