Marine Seismic Surveys and Turtles: a short review of environmental risk and management 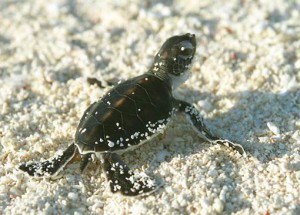 Hatchling making its' way to the Indian Ocean

Hearing Ability: The sea turtle’s auditory canal consists of cutaneous plates underlain by fatty material at the side of the head which serves the same function as the tympanic membrane in the human ear. From previous research it is evident that sea turtles can detect sound, and that their hearing is confined to lower frequencies, mainly below 1000 Hz (Bartol, Musick & Lenhardt 1999). Studies using auditory brainstem responses of juvenile green and Ridley’s turtles and subadult green turtles showed that juvenile turtles have a 100 to 800 Hz bandwidth, with best sensitivity between 600 and 700 Hz, while adults have a bandwidth of 100 to 500 Hz, with the greatest sensitivity between 200 and 400 Hz (Bartol 2006; Bartol & Ketten 2006).

Physical Damage: Little is known about the source levels and associated frequencies that will cause physical injury to turtles. Studies by Keevin and Hempen (1997) on the effects of explosions on turtles recommend that an empirically based safety range developed by Young (1991) be used for guidance. Using Young’s safety range formula, and converting back to sound pressure levels, a value of 240 dB re 1μPa @1 m is obtained for adult turtles.

There are no known studies data addressing threshold shift in turtles. Possibly the best source of information comes from Eckert et al. (1998) who, as part of their study on leatherback turtles reviewed the literature and, drawing on physiological similarities to terrestrial species, derived the predicted level at which temporary threshold shift may occur as being in the order of 185 dB re 1 μPa for seismic survey shots.

Behavioural Response: Sea turtles have been recorded as demonstrating a startle response to sudden noises (Lenhardt et al. 1983). However, few studies have investigated threshold level necessary for behavioural effects. Early work by Wilcox and O’Hara (1994) and Moein et al (1995) looked at the use of noise as acoustic deterrents. McCauley 1994 describes how O’Hara and Wilcox (1990) positioned a seismic airgun at the end of a canal to create a sound barrier to loggerhead turtles. They found that airguns with a source level of approximately 220 dB re 1µPa at 1m (measured in the 25 to 1000 Hz range) were effective as a deterrent for a distance of about 30 m. Moein et al (1995) used airguns to investigate means to repel loggerhead turtles from approaching hopper dredges. A net enclosure was created to contain the turtles and airguns positioned at either end of the net. Three source levels were applied; 175, 177 and 179 dB re 1µPa at 1m (measured in the 100 to 1000 Hz range). Avoidance was observed after the first exposure.

McCauley et al (2000) conducted controlled exposure experiments on a loggerhead turtle and a green turtle to monitor behavioural response to approach by an airgun. They found two types of response:

1. Above a received airgun level of approximately 155 dB re 1 μPa2-s the turtles began to noticeably increase their swimming speed.

2. Above a received airgun level of approximately 164 dB re 1 μPa2-s the turtles began to show more erratic swimming pattern, possibly indicative of them being in a distressed state.

Eckart et al (2004) used GPS and Time Depth Recorder (TDRs) to track movement and behaviour of two leatherback turtles exposed to seismic survey noise. They found no change in behaviour or movement from previous turtles that were not exposed to seismic survey noise. However the authors caution that the sample size (two turtles) meant that quantitative analysis was not possible.

Weir (2007) carried out observations from on-board a seismic survey vessel during a 10 month 3D survey offshore from West Africa. She concluded that “..There was indication that turtles occurred closer to the source during guns-off than full-array, with double the sighting rate during guns-off in all distance bands within 1000 m of the array. However, there was no significant difference in the median distance of turtle sightings from the airguns during full-array (mean= 779 m, SD=464, N=57) or guns-off (mean= 743 m, SD=449, N=112) (Mann-Whitney U = 3035, N= 169, P = 0.6). While this result apparently indicates a lack of movement away from active airguns, it is possible that turtles only detect airguns at close range or are not sufficiently mobile to move away from approaching airgun arrays.”

Although the received noise levels were not stated by (Weir 2007) it can be deduced from the description of the airgun array that the received noise level at 1000 m would be in the order of 160 dB re 1 μPa2-s. The reduction in number of turtles observed within 1000 m during operation of a full airgun array (Weir 2007) is therefore reasonably consistent with the observations of McCauley et al (2000) which indicated a behavioural response threshold of approximately 155 to 166 dB re 1 μPa2-s.

Concerns regarding potential for seismic surveys to deter turtles from approaching nesting beaches have been raised, but little data is available to assess the likelihood of this occurring. In the case of pulsed low frequency sound effects on turtle nesting behaviour, nest numbers monitored on beaches near the Port of Hay Point (Queensland) before, during and after a pile-driving program lasting several months in 1996-97 were compared. Results showed no significant trend in nest numbers, indicating that the female turtles had not been particularly sensitive to this pulsed source (Dames & Moore 2000), but nest numbers were too few to provide a conclusive result.

Management Measures: The potential for physical damage is very low and would only occur if the turtle was in very close proximity (within a few metres) of the airgun array during discharge. Threshold shift may occur if the turtle is continuously exposed over several hours to levels in excess of approximately 185 dB re 1 μPa. However is considered unlikely since the animal would need to swim parallel to the vessel within a range of less than about 200 m for several hours. No additional management measures for prevention of physical damage to turtles are considered necessary.

The threshold for behavioural effects is uncertain, but based on the limited studies carried out may be expected to occur at received noise intensities of approximately 155 dB re 1 μPa2-s. This equates to a distance of about 1 to 1.5 km from an airgun array of the size normally used in Australian waters. The Western Australian Environmental Protection Authority (EPA, 2007) has previously required a separation of distance of 3 km between seismic surveys and the turtle nesting location of Sandy Island at Scott Reef.